June 27, 2021 (Brian Berletic – NEO) – The US government’s regime change funding organization – the National Endowment for Democracy (NED) – headed since its inception in 1983 by Carl Gershman – now has a new president and CEO – Damon Wilson.

The NED’s own announcement regarding the handover provides some background for Wilson, claiming:

Mr. Wilson currently serves as Executive Vice President of the Atlantic Council, a role he has held since 2011, overseeing Council strategy and managing its 14 centers and programs. Earlier, Wilson served as Special Assistant to the President and Senior Director for European Affairs at the National Security Council (2007-2009).  He was Executive Secretary and Chief of Staff at the US Embassy in Baghdad (2006-2007), where he helped manage one of the largest US embassies during a time of conflict. Prior to this posting, he worked at the National Security Council as the Director for Central, Eastern, and Northern European Affairs (2004 to 2006) and served as Deputy Director in the Private Office of NATO Secretary General Lord Robertson (2001-2004). He has also worked in the Department of State’s Office of European Security and Political Affairs, on the State Department’s “China desk,” and at the US Embassy in Beijing. Wilson also served with Save the Children in Rwanda from 1995-1996.

Wilson’s previous employment – unlike Gershman who at least on paper came from a “humanitarian” background – reveals an unapologetic pro-war, pro-American hegemony administrator and policymaker.

These suspicions are immediately grounded in Wilson’s own activities over the past decade at the Atlantic Council – an arms industry, oil company, and bank-funded “think tank” promoting US socio-economic, political, and military domination over the planet and all the wars, interventions, and meddling used to achieve it.

Understanding Wilson’s career of promoting American belligerence abroad will help one better understand which direction the US NED will take in its continued role in funding US-backed opposition groups and the regime change operations they are tasked with carrying out by Washington around the globe.

The NED’s inception in 1983 – according to the Western media itself – was to rehabilitate the image of what was at the time CIA-sponsored regime change operations.

The Washington Post in a 1991 article titled, “Innocence Abroad: The New World of Spyless Coups,” would admit:

The great democratic revolution that has swept the globe over the past few years has been a triumph of overt action. The CIA old boys spent a generation fantasizing about this sort of global anti-communist putsch. But when it finally happened, it was in the open. There were no secret paramilitary armies, and there was almost no bloodshed. The key operatives in the conspiracy turned out to be telephones, televisions and fax machines.

Working in broad daylight, the United States and its allies were able to do things that would have been unthinkably dangerous had they been done in the shadows.

Regarding the NED specifically, the Washington Post would note:

The sugar daddy of overt operations has been the National Endowment for Democracy, a quasi-private group headed by Carl Gershman that is funded by the U.S. Congress. Through the late 1980s, it did openly what had once been unspeakably covert — dispensing money to anti-communist forces behind the Iron Curtain.

In other words, the NED was a rebranding effort meant to dress up dirty and destructive US regime change campaigns as “promoting freedom around the world” – just as the NED’s slogan says on its official website. It always was – from 1983 when it was first announced to today – a velvet glove placed over the iron fist of covert US interventionism.

Over the years, as the NED and parallel organizations, institutions, and agencies have attracted more scrutiny, the once “transparent” nature of their work has been increasingly covered up, with key opposition groups receiving NED money removed from public disclosures on the NED’s website, and the NED becoming increasingly covert – defeating the entire purpose of its creation and existing simply as a redundant extension of the CIA itself.

With Wilson’s appointment as president and CEO of the NED – the velvet glove is coming off altogether. 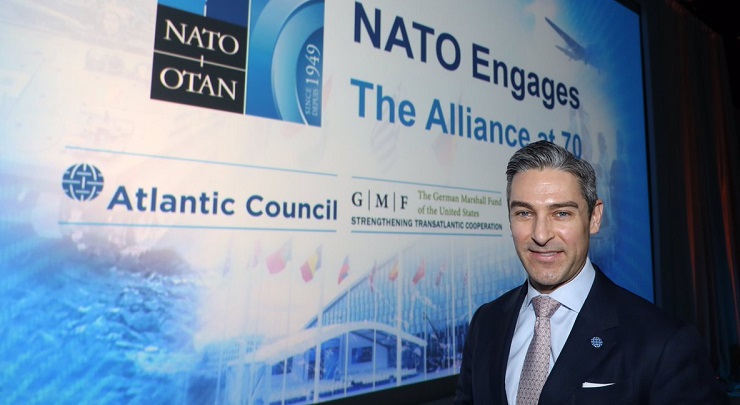 In a 2018 Atlantic Council talk titled, “Frontlines of Freedom,” Wilson would admit:

…the strategy [of consolidating control over Eastern Europe] is not meant to create new dividing lines in Europe. The aim is to anchor a vulnerable, insecure zone in the certainty of a stable and prosperous and free Europe, and over the long time [sic] this vision includes a democratic Russia. But the pathway to reform in Moscow might just begin with choices that are made in Kiev, Chișinău, Yerevan, and Tbilisi.

Wilson reveals the goal of US policymakers and their involvement in both the EU and NATO is not only to move both organizations up to Russia’s borders, but to absorb Russia itself – a policy that couldn’t be more obvious to geopolitical observers and the clear driving force behind Western-Russian tensions today.

Throughout his time at the Atlantic Council he has helped promote US State Department narratives regarding not only the EU and NATO’s antagonism toward Russia, but the West’s wars abroad in general including those in North Africa and the Middle East.

In 2016 at the US Embassy in Berlin, he would advocate continued sanctions on Syria as well as continued support for armed militants the US is sponsoring to fight Syria’s government by proxy.

Wilson also participated directly in war propaganda projects with other notorious appendages of the Atlantic Council. This includes a co-authored paper he wrote with US government-funded “Bellingcat” founder Eliot Higgins titled, “Hiding in plain sight: Putin’s war in Ukraine.”

Together with Wilson as president of the NED –  sitting on the NED’s board of directors – are people like convicted criminal Elliott Abrams who oversaw death squads in Central and South America, Scott Carpenter who directly participated in the US occupation of Iraq as “director of governance for the Coalition Provisional Authority,” and Victoria Nuland whose conversations regarding the US hand-picking Ukraine’s new government in the wake of the US-sponsored 2014 coup was leaked to the media.

The NED’s role in promoting US-backed regime change under the paper-thin veneer of “promoting freedom around the world” will likely transform into a much more direct tool of aggression wielded by the US alongside sanctions and the ever-looming threat of military aggression.

And while the US may believe Wilson’s appointment as president and CEO of the NED signals “strength,” in reality it is a sign of America’s growing weakness in combination with an increasingly aware global public – a global public that understands what the NED is, what it does, and the danger it poses – no matter what it claims to represent or to be doing worldwide.

Wilson’s appointment as president and CEO of the NED may help governments around the globe better explain to their respective populations the danger the NED poses and the necessity of legislation to inhibit or entirely ban the organization and those taking money from them from within their borders.

Gershman – for nearly 40 years – oversaw an NED attempting and ultimately failing to put a velvet glove over CIA-sponsored regime change. Wilson will be overseeing an NED unable to hide behind such facades any longer – with his own pro-war, pro-intervention, and pro-special interests background undermining the organization’s self-proclaimed but obviously misleading mission statement even further.