Whether in Thailand or in Belarus the US uses the same tired template to push regime change and advance its foreign policy, while the Western media covers it up in a tidal wave of lies. Caitlin Johnstone explains.

“Belarusians, inside and outside of the country, have reached out to me this week to ask why the West is so indifferent to their courageous fight for democracy. I can’t explain. Can you?”

Two months ago, Moon of Alabama published an article titled“Belarus – A US Sponsored Color Revolution Is Underway,” documenting all the telltale signs that the Moscow-aligned nation would soon be overrun with protests in opposition to its Soviet-style government. Here’s an excerpt from that June 16 article:

On August 9 Belarus will hold presidential elections. Lukashenko will do his best to win again.

Color revolutions are usually launched over controversial elections. The results are publicly put into doubt even before the election begins. When the results finally arrive, Western media will claim that they diverge from the expectation it created and therefore must have been faked. People will be pushed into the streets to protest. To increase the chaos, some sharp shooters may be put to work to fire at the police and at protesters like it was done in Ukraine. The revolt ends when it is flogged down or when the US favorite candidate is put into place.

Last year the US National Endowment for Democracy financed at least 34 projects and organizations in Belarus. The US does not do that out of charity but to put its finger on the scale.

All the usual imperial narrative management operations were in place in the lead-up to the nation’s election this month, and now we’re seeing CIA cutouts like Radio Free Europe/Radio Liberty and the National Endowment for Democracy cheering on the protests and condemning the Belarusian government in sync with the US State Department.

“We support the protesters and condemn the brutal government crackdown against them,” said the government with no self awareness whatsoever.

So it’s all unfolding according to the same old patterns. A formula that is so tired and repetitive that those with an ear to the ground can predict them before they happen.

Again, I am not highlighting McFaul’s tweet because it is unusual. I am highlighting it because, in our insane world that is dominated by a ‘The Blob’-reminiscent empire which constantly works to absorb or destroy all nations which are not aligned with it, it is completely normal and mundane. It’s one of nearly infinite tweets, articles and TV clips I could have chosen from as an example of the way establishment narrative managers consistently twist the story of what’s happening in our world in favor of the US-centralized empire and against governments which have resisted absorption into its gelatinous folds. 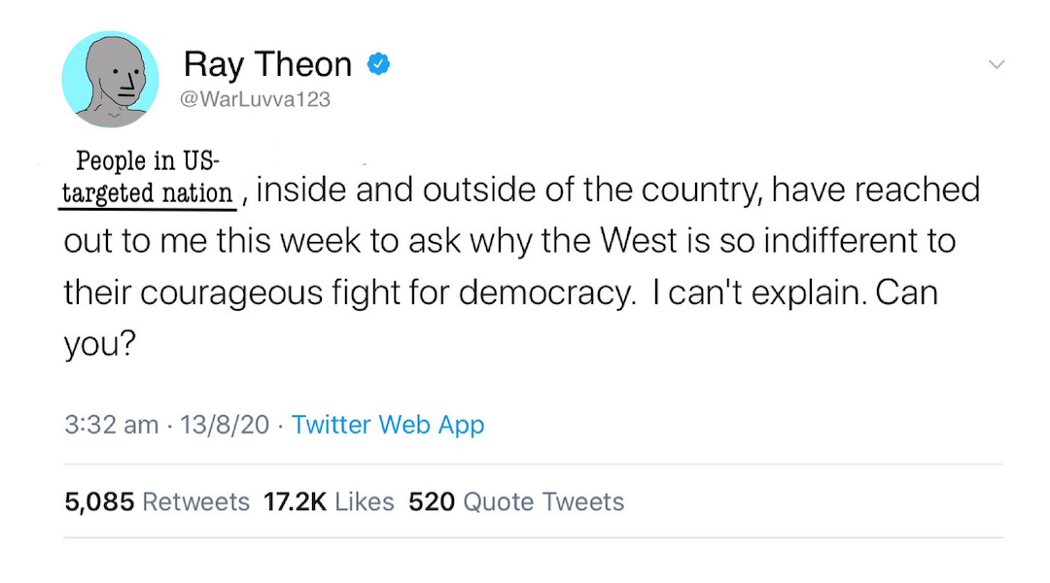 There. That’s a bit more honest.

I love my job. Really, I do. But in some ways writing commentary about the shenanigans of Western imperialism is the most boring and repetitive task you can possibly imagine.

There’s really never anything new. It’s the exact same formula with the exact same depraved imperialists spouting the exact same script about nations which rotate in and out of their crosshairs from day to day. And what makes it even more tedious is the fact that everyone’s expected to treat each new “OMG this unabsorbed government must be opposed!” narrative cycle like it’s something new and different.

It isn’t new, and it isn’t different. It’s gotten to the point where it’s the exact same international political news story every single day, and that news story reads as follows:

“US-centralized empire tries to grow larger by absorbing a nation which is fighting to maintain its military, financial, economic and/or resource sovereignty.”

That’s it. That’s all the international politics news you’ll ever see, in its entirety. The rest is just frills laid overtop it so you don’t realize you’re being fed the same exact bulls**t every motherf**king day.

And the billionaire news media always march right along with it, because they’ve all got systems inplace to boost narratives which maintain the status quo that those billionaires have built their kingdoms upon. The reporters who work for such mass media outlets have no loyalty to truth or facts, only to facilitating the expansion of the empire.

Don’t believe me? Read this Fairness and Accuracy in Reporting piece from last year documenting the fact that mass media coverage fixated uniquely on the anti-Beijing protests in Hong Kong while ignoring the protests against US-aligned governments like France, Israel, Chile and Haiti. Or this one from 2002 about the way the Washington Post editorial board was constantly shrieking about the need for regime change in Iraq because Saddam might have chemical weapons, but contented itself with a brief and mild finger-wagging during the Reagan administration when he actually used chemical weapons.

They have no principle at all. No interest in truth whatsoever.

If Saudi Arabia pivoted its loyalty from the US to China, we’d immediately begin seeing daily coverage of the atrocities in Yemen like we should have been seeing this entire time.

If Israel pivoted from Washington to Moscow we’d immediately be saturated in news stories about the plight of the Palestinians and the protests against Netanyahu’s corruption.

If Australia left the blob and began insisting on its own sovereignty, the world would suddenly find itself urged on a daily basis to care a lot more about aboriginal rights and the refugees in offshore detention centers.

If the government which exited the imperial blob didn’t have any particularly damning humanitarian abuses on its record, Western intelligence agencies would make something up, and Western media would uncritically report it as an absolute fact.

Mainstream pundits and reporters would make these shifts without skipping a beat. They’d pretend it had been their position the entire time. And when they went to bed at night, they’d sleep like babies.

How do I know this? By observing their current behavior.

And yet every time the establishment narrative managers begin babbling about the Evil Unabsorbed Government of the Week, I get people yelling at me that this time it’s completely different and Mike Pompeo is totally telling us the truth about this one. They’re like a three-year-old who insists on watching the same damn Disney movie thousands of times over, multiple times per day. Only difference is the three-year-old is probably learning something.

As narrative control gets more tenuous, we might start seeing people waking up from the puppet show. Until then, all clear-eyed rebels can do is keep pointing at the gaps in the matrix of this one monotonous, repetitive news story in as many different ways as possible to help wake people up from the propaganda-induced dream.