December 27, 2014 (Maram Susli – NEO) – US supplied TOW anti-tank missiles have ended up in the hands of Jabhat Al Nusra, Syria’s branch of Al Qaeda. The US provided the missiles to CIA vetted Syrian rebel faction Harakat Hazm in May. A video posted by Al Nusra shows the weapons being used to take over Syrian military bases, Wadi Deif and Hamidiyeh in Idlib province. 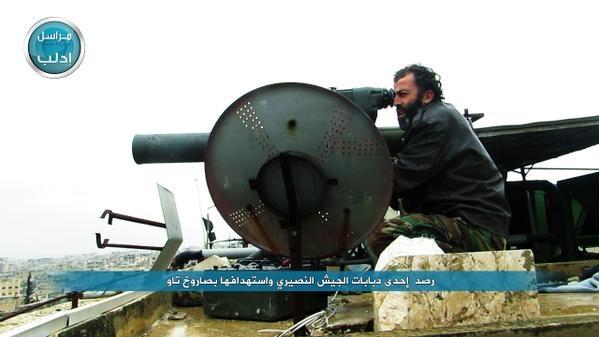 A story that should have been headline news of Obama’s arming of Al Qaeda across all US media, largely went unnoticed. The only evidence of the story in the mainstream media can be found in the International Business times and the Washington Post. However both articles try to cast doubt on the claims that Al Nusra has TOW missiles, choosing to quote the Syrian Opposition Council spokesman Oubai Shahbandar who downplayed the incident, calling it an “Al Nusra psyop”. The New York Times did not headline the story and instead buried the information in an article headlined “2 Military bases in Syria Fall to Rebels”. However, The New York Times claimed the TOW missiles may have plaid a central role in Jabhat AL Nusra’s takeover of the bases.

Contrary to Shahbandar’s and the mainstream media’s insinuation that the evidence is an ‘Al Nusra pysop’, it is known that the US armed and trained Harakat Hazm group had signed a ceasefire agreement with Jabhat AL Nusra in November in the same region of Idlib Province. At that time Al Nusra had claimed TOW and Grad missiles were now in their hands.

It is questionable whether or not Al Nusra had ‘seized’ the arms as the New York Times suggests, or if it had simply been given the arms by Harakat al Hazm. Rather than fighting Al Nusra, Harakat Hazm has had no problem uniting with them. Currently Harakat al Hazm are united with Jabhat al Nusra, in Handarat Aleppo, and are jointly fighting the Syrian Army. The militant employing the TOW missile in the video, shows clear proficiency in its use, indicating that he has directly or indirectly benefited from US training.

In spite of this revelation, there is evidence to suggest the US is still arming the FSA with TOW missiles. Videos continue to emerge of Harakat al Hazm employing Tow Missiles. The US government has not made a statement on whether or not they have stopped providing the rebels with TOW missiles and munitions.

The alliance between FSA faction Harakat Hazm and Al Nusra in Aleppo, is not a new or isolated occurrence. US vetted rebels have in fact have been allied with Al Qaeda for much of the Syrian War, with localised clashes over control being rare. The leader of the “Syrian Revolutionary Front,

‘ Jamal Ma’arouf, touted as a moderate by the West, admitted to The Independent that he has openly fought battles alongside Jabhat Al Nusra and refuses to fight against them. In 2012 the Free Syrian Army (FSA), referred to as the ‘moderate rebels’ by the US State Department, fought along side Islamist State In AlSham (ISIS) in Aleppo against the Syrian military for control over Menagh Airbase. The FSA head of Aleppo Military Council Abdul Jabbar Al Oqaidi, who has met with US Ambassador Robert Ford, was filmed with ISIS Emir Abu Jandal praising ISIS for helping take the base using a suicide car bomb. As late as September 2014, FSA commander Bassel Idriss said that they had joined forces with ISIS and Jabhat Al Nusra in Qalamoun Mountain.

“Let’s face it: The Nusra Front is the biggest power present right now in Qalamoun and we as FSA would collaborate on any mission they launch as long as it coincides with our values,” the [FSA] commander concluded.

As well as fighting alongside Al Qaeda the US vetted rebels have also defected to, and sold weapons and hostages to Al Qaeda groups. The line between the FSA and Al Qaeda groups is often blurred with entire FSA factions and individual fighters defecting to Jabhat Al Nusra or ISIS on multiple occasions [1][2][3][4], taking along with them the training and weapons paid for by US taxes in the process.

An ISIS commander, Abu Atheer, told Al Jazeera that his group bought weapons from the FSA.

“Anyhow we are buying weapons from the FSA. We bought 200 anti-aircraft missiles and Koncourse anti tank weapons. We have good relations with our brothers in the FSA.”

The spokesman for the family of Steven Sotloff, an American journalist beheaded by ISIS, told CNN that US backed FSA rebels had sold Sotloff to ISIS for 25,00 to 50,000 USD. The White House denied the claim. However the claim was corroborated by Theo Padnos, another journalist held hostage in Syria, who said he was returned to his Jabhat Al Nusra captures by the FSA every time he tried to escape.

Given the Syrian rebels’ history of openly working along side or defecting to Al Qaeda groups, it is highly doubtful the US government did not predict the TOW missiles would end up in Al Qaeda’s hands.

It is more likely the US provided the rebels with the TOW missiles whilst knowing it would end up in the hands of Al Qaeda. Indeed it has been widely accepted, that Jabhat Al Nusra, ISIS and Ahrar al Sham , another Al Qaeda linked group, are the most powerful groups opposing the Syrian army. The CFR wrote:

The Syrian rebels would be immeasurably weaker today without al-Qaeda in their ranks.

Whilst in future these weapons may be used against American personnel, for now the US is desperate for a victory against the Syrian government. The US might find reports of arms ending up with Al Qaeda embarrassing, but such embarrassment can be mitigated by controlling the amount of attention it gets from the US run media.

Therefore the purpose of advertising a ‘moderate rebel force’ is to maintain plausible deniability whilst still supporting what is largely an Al Qaeda rebellion against the Syrian government. In fact there is evidence to suggest the US would prefer Al Qaeda to other rebel groups. They are far cheaper to run given that they are funded by Gulf States and they may fit better with the US long term objective of balkanise Syria along sectarian lines.

Maram Susli also known as “Syrian Girl,” is an activist-journalist and social commentator covering Syria and the wider topic of geopolitics. especially for the online magazine“New Eastern Outlook”.