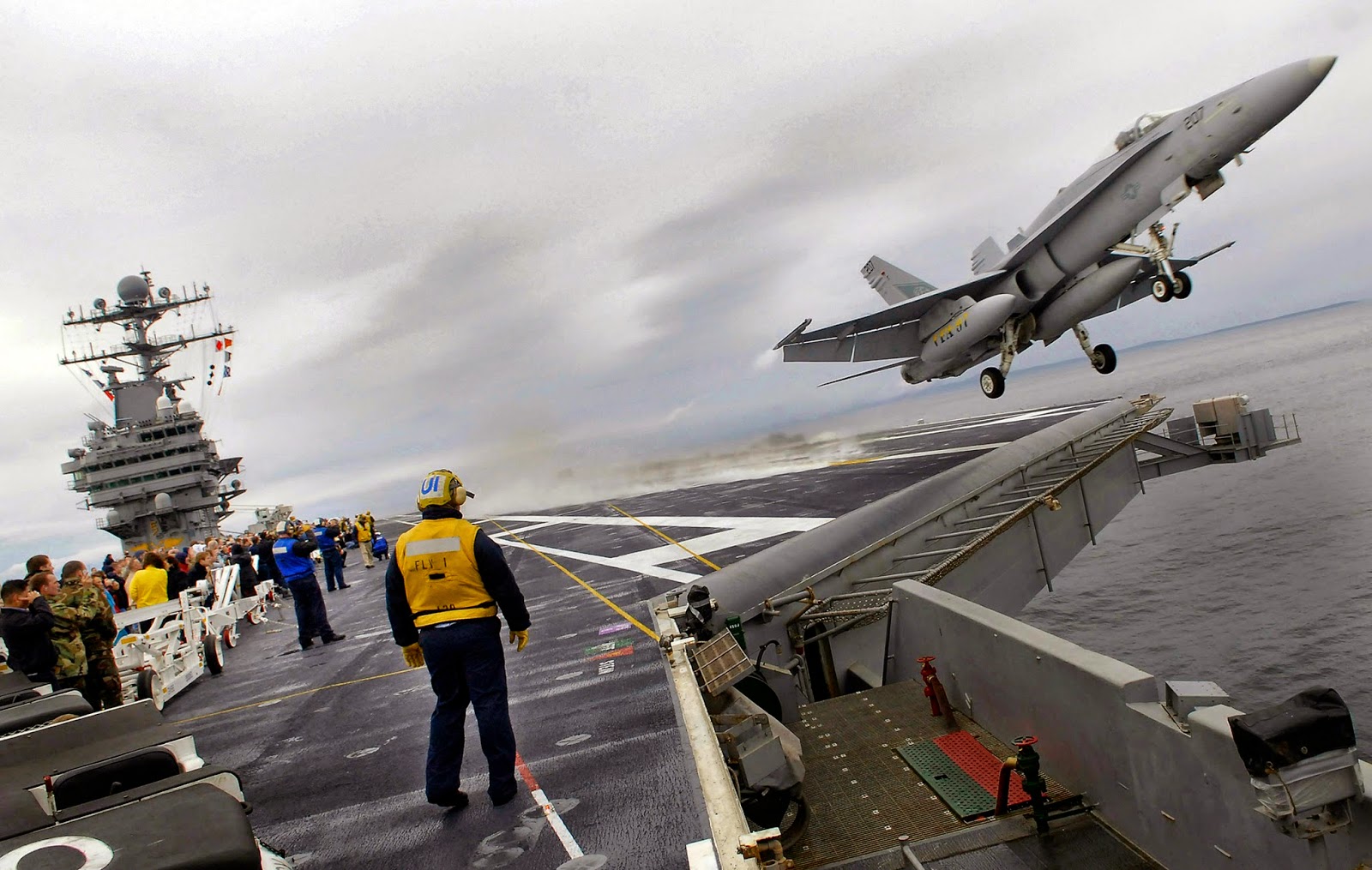 September 24, 2014 (Tony Cartalucci – NEO) – The West was racing against the clock – attempting to justify war with Syria by allegedly “fighting” the so-called “Islamic State” (ISIS) in Syrian territory before the world fully realized the West and its allies had in fact created ISIS in the first place and was to this day arming, funding, and directing them. In haste that can only be described as desperation bordering criminal insanity, the West announced that it has begun air and missile attacks on Syrian territory.

It alleges that it is attacking ISIS, however – and unlike its campaign in neighboring Iraq – the US in particular refuses to provide any details as to what it is actually doing in Syria.

Reuters would report in its article, “U.S., Arab partners launch first strikes on IS in Syria,” that:

It is these very “Arab partners” that are also on record, arming and funding terrorism along Syria’s borders as well as backing terrorist organizations operating in Syria itself.  Saudi Arabia and Qatar, in particular, have been providing money and cash, while the US CIA distributed it mainly along Turkey’s border with Syria in the north, and Jordan’s border with Syria to the south.

Despite years of rhetoric attempting to differentiate what the West calls “moderates” from known terrorist organizations including US State Department-listed foreign terrorist organizations Al Nusra, and the Islamic State in Iraq and Syria (ISIS), it is clear that literally days before ISIS crossed into Iraq triggering the latest geopolitical crisis in the region, ISIS was fighting alongside so-called moderates in an attack on Syria’s town of Kassab along the border with Turkey. Turkey, a NATO member, would even go as far as providing aircover for the attack which was in fact launched from Turkish territory.

The fact remains that the only genuine fight against Al Qaeda, ISIS, and other terrorist groups in the region, has been led by the Syrian government and its military.

Carving Off a “Terror Capital” for the West’s Proxies

Whatever it is that the US and its “Arab partners” are attacking in Syria at the moment, it is assuredly not ISIS. When the smoke clears, we will likely see Syria’s Raqqa region carved off and firmly in the hands of the very terrorists the US claims it is attacking. The only change will be that they now benefit from US airpower, and the Western media will no longer label them ISIS, but rather, as “moderates.” Carving off Aleppo would also be likely, though loftier goal for the West – transforming  either it or Raqqa into an “opposition capital” like Benghazi was in Libya.

Carving off territory from Syria and creating “bufferzones” was part of the US agenda in Syria for years – long before the threat of ISIS was wielded as a potential pretext for direct US military intervention. ISIS is simply the latest construct being used to implement the strategy.

While the idea of a buffer zone is meant to look like the latest honest attempt to solve a growing regional crisis and to “win” the war in Syria, in reality this has been planned since at least March of 2012, where the idea was proposed by the corporate-financier funded Brookings Institution in their “Middle East Memo #21” “Assessing Options for Regime Change” where it stated specifically (emphasis added):

“An alternative is for diplomatic efforts to focus first on how to end the violence and how to gain humanitarian access, as is being done under Annan’s leadership. This may lead to the creation of safe-havens and humanitarian corridors, which would have to be backed by limited military power. This would, of course, fall short of U.S. goals for Syria and could preserve Asad in power. From that starting point, however, it is possible that a broad coalition with the appropriate international mandate could add further coercive action to its efforts.”

Brookings continues by describing how Turkey’s aligning of vast amounts of weapons and troops along its border in coordination with Israeli efforts in the south of Syria, could help effect violent regime change in Syria:

In addition, Israel’s intelligence services have a strong knowledge of Syria, as well as assets within the Syrian regime that could be used to subvert the regime’s power base and press for Asad’s removal. Israel could posture forces on or near the Golan Heights and, in so doing, might divert regime forces from suppressing the opposition. This posture may conjure fears in the Asad regime of a multi-front war, particularly if Turkey is willing to do the same on its border and if the Syrian opposition is being fed a steady diet of arms and training. Such a mobilization could perhaps persuade Syria’s military leadership to oust Asad in order to preserve itself. Advocates argue this additional pressure could tip the balance against Asad inside Syria, if other forces were aligned properly.

Clearly,  a “buffer zone” is the next step for Western designs aimed at exacting regime change in Syria and would be a move the Syrian government would not readily agree to. It was also a step that merely needed a pretext to move forward. In 2012, fabricated border incidents with Turkey were being used to help implement this strategy but failed. Now the threat of ISIS is being used to resell the exact same scheme.

While Turkey and Israel continue applying pressure on Syria’s borders, America’s assault on Syrian territory itself will begin carving out the safe havens and corridors described by Brookings in 2012.

Before Syria and its allies could fill the geostrategic void Western-backed terrorists created in eastern Syria and northern Iraq, the West has moved – but perhaps what would have become a trap for Syrian, Iranian, and other regional forces, may end up a trap instead for Western forces and their “Arab partners.”  This however, depends entirely on Syria and its allies’ ability to mire the West in protracted fighting – fighting that may eventually lead to America’s Persian Gulf allies’ doorsteps.

For now, Syria and its allies must formulate carefully a strategy that resists overreaction to immense provocations, understand the true nature of America’s aggression, determining whether it was exercised from a position of strength or immense weakness, and devise countermeasures that accommodate long-term consequences of America’s current campaign. A balance between allowing the West to exhaust its last desperate options, but preventing long-term entrenchment of Western-backed proxies must be struck.