The West created and runs Israel, Hamas, the “Free Syrian Army,” and the Muslim Brotherhood – when the public needs to be manipulated, a deadly ballet ensues.

November 16, 2012 (LD) – The Western allied, funded, armed, and directed sectarian extremist organizations, namely Al Qaeda, the Muslim Brotherhood, and their subsidiaries of Hamas and the so-called “Free Syrian Army,” were created and to this day are backed specifically to counter real opposition to Western designs of hegemony across the Muslim World.

The West has also created and continues to perpetuate Israel as it exists in its current state, a purposefully provocative militant nation that serves as a beachhead for Western objectives throughout the region, as well as a perpetual impetus for filling the ranks of extremist groups who are then turned loose against the West’s enemies.

While Israel conducts combat operations against Hamas in Gaza, they are supporting their affiliates in Syria just across the border upon the Golan Heights, and across greater Syria in coordination with the US, France, England, Saudi Arabia, and Qatar.

While US representatives frequently meet in Doha, Qatar to support and continue propping up the political front serving as cover for Western, Saudi, and Qatari backed terrorists in Syria, Qatar’s unelected leader-for-life, Sheikh Hamad bin Khalifa Al Thani, has slinked in and out of Gaza to pour 250 million dollars into Hamas just before the latest Israeli-Hamas violence broke out.

It is documented that since 2007 the US, Israel, and Saudi Arabia have been colluding to arm and unleash sectarian extremists, both Al Qaeda and the Muslim Brotherhood, against their collective enemies across the region. With the West using Qatar as a base of operations, not only to continuously prop up the so-called “Syrian National Council,” but to base the corporate-funded Brookings Institution think-tank’s Doha Center, are we to believe that Qatar is not-so-secretly trying to destroy Israel right under America’s nose? Without condemnation or protest from the US or any of its co-conspirators?

As difficult as it is to believe, the current government in Israel is purposefully placing the lives of its citizens and soldiers in harm’s way to execute an orchestrated geopolitical stunt – aimed at capturing the sort of popular support Hezbollah had gained in defending Lebanon in 2006. Unlike in 2006, where Hezbollah was backed by, according to Western sources, Syria and Iran, today, Hamas is, as it always has been, supported by Saudi Arabia and Qatar, with Israel and the US playing a more covert role of funding, infiltrating, directing and manipulating the organization.

The Wall Street Journal reported in their article, “How Israel Helped to Spawn Hamas,” that:

“Hamas, to my great regret, is Israel’s creation,” says Mr. Cohen, a
Tunisian-born Jew who worked in Gaza for more than two decades.
Responsible for religious affairs in the region until 1994, Mr. Cohen
watched the Islamist movement take shape, muscle aside secular
Palestinian rivals and then morph into what is today Hamas, a militant
group that is sworn to Israel’s destruction.

Instead of trying to curb Gaza’s Islamists from the outset, says Mr.
Cohen, Israel for years tolerated and, in some cases, encouraged them as
a counterweight to the secular nationalists of the Palestine Liberation
Organization and its dominant faction, Yasser Arafat’s Fatah. Israel
cooperated with a crippled, half-blind cleric named Sheikh Ahmed Yassin,
even as he was laying the foundations for what would become Hamas.
Sheikh Yassin continues to inspire militants today; during the recent
war in Gaza, Hamas fighters confronted Israeli troops with “Yassins,”
primitive rocket-propelled grenades named in honor of the cleric.

This is in fact exactly what Hamas is still being used today for – to counter real opposition movements by dividing against each other different factions of Muslims and secular organizations alike, in confusion and armed combat, preventing a greater, unified front against Western expansion and exploitation throughout the region. Extremist groups closely aligned to Hamas, including Al Qaeda and the Muslim Brotherhood, would flood into Iraq during the US occupation to “serendipitously” disrupt united Sunni-Shia’a resistance, and create bloody infighting that broke the back of meaningful opposition against foreign occupation.

These same networks used to flood Iraq with terrorists from across the region, have since 2007, been used by the West, including Israel, to begin a wider confrontation with Hezbollah in Lebanon, as well as with Syria, and Iran. Exposed in Pulitzer Prize-winning journalist Seymour
Hersh’s “The Redirection,”
published that same year in the New Yorker, it was revealed that many
of these sectarian extremists were in fact affiliated directly with Al
Qaeda.

To undermine Iran, which is predominantly Shiite, the Bush
Administration has decided, in effect, to reconfigure its priorities in
the Middle East. In Lebanon, the Administration has coöperated with
Saudi Arabia’s government, which is Sunni, in clandestine operations
that are intended to weaken Hezbollah, the Shiite organization that is
backed by Iran. The U.S. has also taken part in clandestine operations
aimed at Iran and its ally Syria. A by-product of these activities has
been the bolstering of Sunni extremist groups that espouse a militant
vision of Islam and are hostile to America and sympathetic to Al Qaeda. –The Redirection, Seymour Hersh (2007)

Hersh’s report would continue by stating:

“the Saudi government, with Washington’s approval, would provide funds
and logistical aid to weaken the government of President Bashir Assad,
of Syria. The Israelis believe that putting such pressure on the Assad
government will make it more conciliatory and open to negotiations.” –The Redirection, Seymour Hersh (2007) 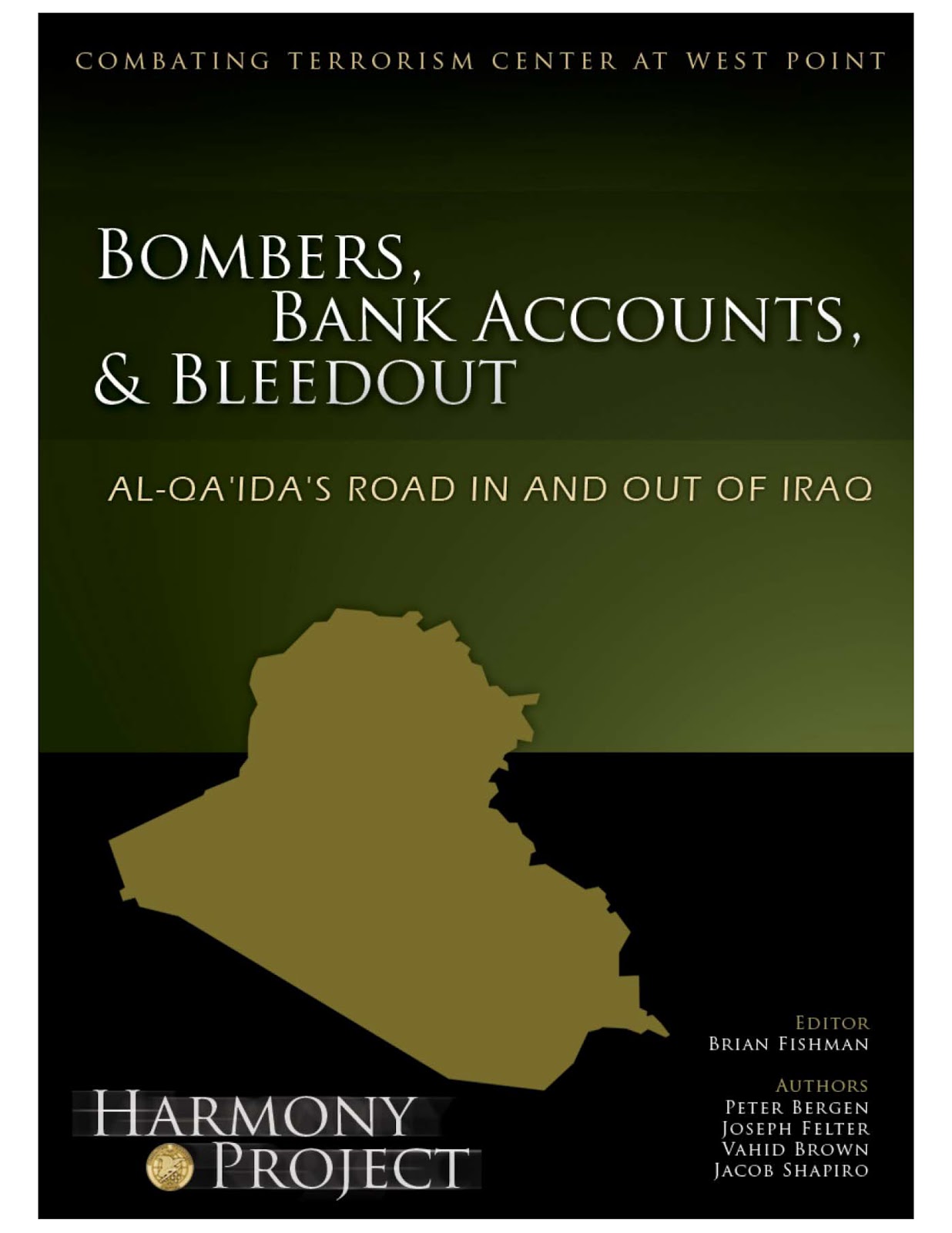 Image: West Point’s second report on Al Qaeda’s networks used to funnel foreign fighters into Iraq titled, “Bombers, Bank Accounts and Bleedout: al-Qa’ida’s Road In and Out of Iraq,”
goes deeper in depth into who was really behind the influx of
terrorists, how it was accomplished, and a range of options that might
be applied to prevent it from happening. The report gives great insight
into just how NATO and the Persian Gulf states are using Al Qaeda to now
destabilize Syria, and how these interests are most likely funding, arming, and manipulating Hamas.

The link between extremist groups and Saudi funding was also mentioned
in the report, and reflects evidence presented by the West Point Combating Terrorism Center
indicating that the majority of fighters and funding behind the
sectarian violence in Iraq, came from Saudi Arabia. Hersh’s report
specifically states:

“…[Saudi Arabia’s] Bandar and other
Saudis have assured the White House that “they will keep a very close
eye on the religious fundamentalists. Their message to us was ‘We’ve
created this movement, and we can control it.’ It’s not that we don’t
want the Salafis to throw bombs; it’s who they throw them at—Hezbollah, Moqtada al-Sadr, Iran, and at the Syrians, if they continue to work with Hezbollah and Iran.” –The Redirection, Seymour Hersh (2007)

And even as early as 2007, direct Western support for the Muslim Brotherhood was already reportedly underway:

“There is evidence that the Administration’s redirection strategy has
already benefited the Brotherhood. The Syrian National Salvation Front
is a coalition of opposition groups whose principal members are a
faction led by Abdul Halim Khaddam, a former Syrian Vice-President who
defected in 2005, and the Brotherhood. A former high-ranking C.I.A.
officer told me, “The Americans have provided both political and
financial support. The Saudis are taking the lead with financial
support, but there is American involvement.” He said that Khaddam, who
now lives in Paris, was getting money from Saudi Arabia, with the
knowledge of the White House. (In 2005, a delegation of the Front’s
members met with officials from the National Security Council, according
to press reports.) A former White House official told me that the
Saudis had provided members of the Front with travel documents.” –The Redirection, Seymour Hersh (2007)

If Al Qaeda, the Muslim Brotherhood, and Hamas are truly a threat to the West and its allies, clearly the West has only itself to blame. The West has been, and to this day still is propping these extremist groups up – so much so that their credibility across the Muslim World has begun to falter.

Could that be the reasoning behind this latest exchange between Israel and Hamas? An attempt to rebuild a tremendous loss of credibility after nearly two years of supporting US, Israeli, Saudi, and Qatari designs against Syria? Is it a much larger version of the US-engineered assaults on its own embassies recently, aimed at reasserting the “War on Terror” narrative after Russia openly accused the US of arming and funding directly Al Qaeda in Syria? Or could Israel simply be “weeding” Hamas of the inevitable “true believers” in their cause leaving only co-opted double agents in the wake of the violence? Perhaps both.

Image: (ABDALRAHEM KHATEB/ASSOCIATED PRESS) An airstrike in Gaza, 2009. Israel and Hamas’ last conflict had kept people divided and squabbling for years. Just as people began to follow the leash of Hamas, the Muslim Brotherhood, and the newly contrived “Free Syrian Army” back to Western hands, Israel and Hamas are once again locked in deadly combat – timing almost as impeccable as US-backed Qatar’s Sheikh Hamad bin Khalifa Al Thani’s visit and generous donation to Hamas just before hostilities began.

One thing that is certain – the threat Hamas poses to Israel is directly proportional to the support it itself gives the organization in the form of both covert financial and military aid, as well as perpetually fueling its rhetorical cause through blatant and continuous provocations aimed at the people of Palestine. It is clear that the only true existential threat Israel and its people face is the duplicity, deceit, and designs of their own ruling government.

As the conflict continues to unfold, it is absolutely imperative to understand and keep in mind the illegitimacy of Hamas and its affiliates across both Al Qaeda and the Muslim Brotherhood – how each organization is currently propped up by the West everywhere from Egypt to Syria and Libya to Yemen. While inevitably people will die on both sides, tempting us to reinvigorate our old pro-Palestine, pro-Israeli prejudices, we must understand that this division is precisely what the West seeks as a medium through which it plans on continuing the pursuit of its regional objectives.