January 7, 2012- Following a Dec 26-Jan 3 visit to Wall Street and London’s proxy of choice, “democratic icon” Aung San Suu Kyi in Myanmar, billionaire banker/speculator George Soros has declared his intentions to set up a permanent mission in Myanmar, still called “Burma” by neo-colonial advocates and Aung San Suu Kyi herself. US State Department-funded “Democratic Voice of Burma” reported that Soros’ mission was an effort to aid Myanmar in “the transition from a closed to a more open society.” Image: Soros is just the latest globalist to rain accolades, praise, and support down upon “democracy icon” Aung San Suu Kyi, whose entire movement is in fact created and funded by the US State Department and corporate-financiers like Soros. Here Suu Kyi consorts with US Secretary of State Hillary Clinton, head of a department Suu Kyi would not exist politically without.

By “open,” of course, Soros means open to the forces of globalization and exploitation by the “international order” contrived by the corporate-financier elite that run it. It should be noted that “democracy icon” Aung San Suu Kyi’s entire movement including the network of NGOs that support her political movement as well as the domestic and foreign media fronts that build up her image is entirely funded by Wall Street and London. 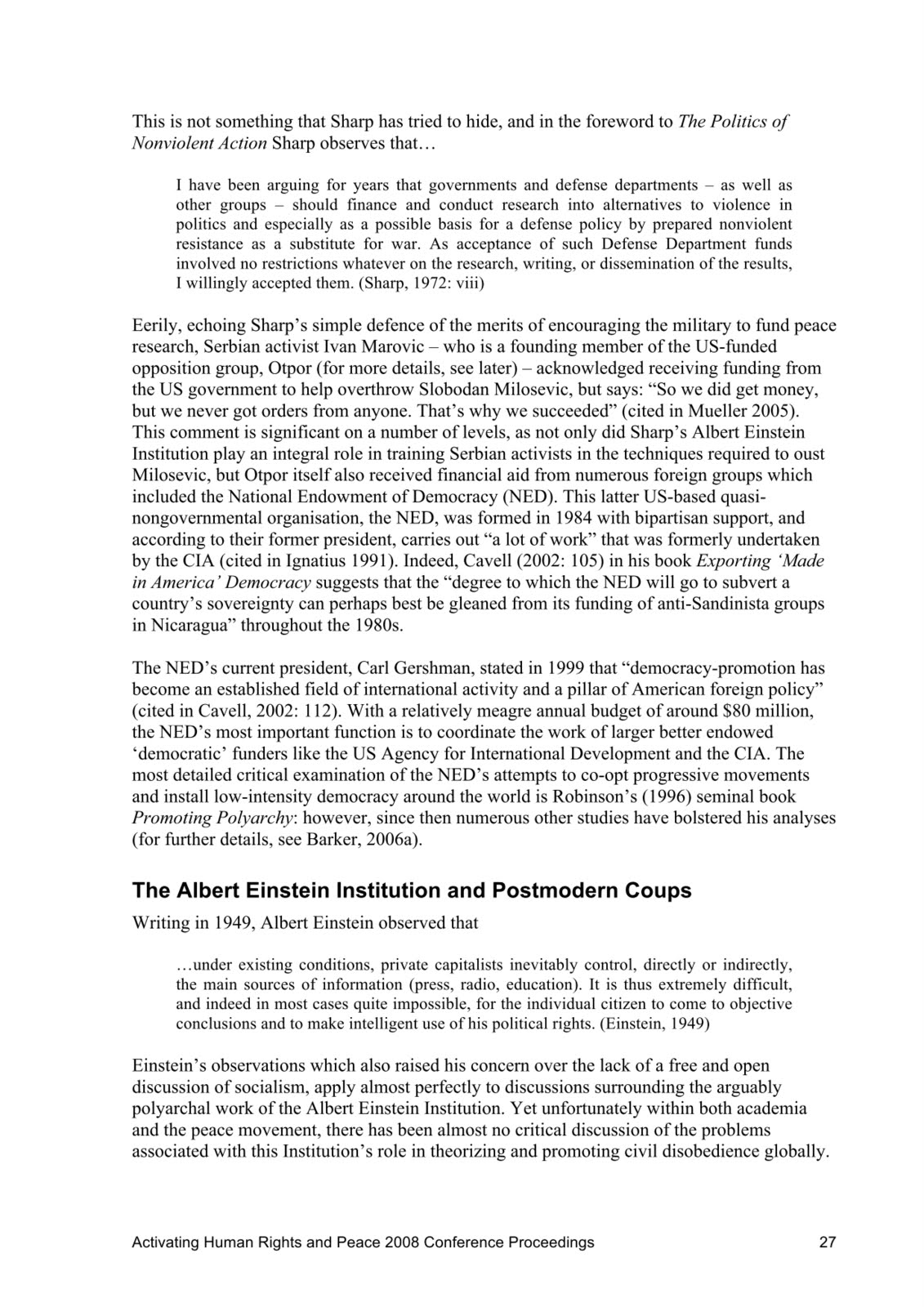 Image: Activating Human Rights & Peace (AHRP) 2008 proceedings, page 8. The .pdf has been taken down by the university, however it is available upon request from Land Destroyer. (click image to enlarge)

It should also be noted that Soros works in tandem with many of these Wall Street/London organizations, including the National Endowment for Democracy (NED) which was descibed by Australia’s Southern Cross University’s “Activating Human Rights & Peace (AHRP)” as carrying out “a lot of work that was formerly undertaken by the CIA” in a revealing account of AHRP’s 2008 proceedings.

Every aspect of Aung San Suu Kyi is the creation of a carefully orchestrated, immensely funded propaganda campaign carried out not within Myanmar but from Washington and the city of London. Every NGO associated with Suu Kyi, every pro-Suu Kyi news service in Myanmar, and every opposition movement supporting her, is either funded by, or a whole cloth creation of, the British and US government.

Soros’ recent trip to Myanmar to meet with this unelected, though defacto “point of contact” for the West, signifies an attempt to conduct this support more openly and possibly attempt to dispel suspicion resulting from Soros and NED’s omnipresent sedition sown worldwide, often operating behind the scenes. However, as we will see, regardless of how open or secretive Wall Street and London attempt to be as they carry out their agenda, the trend of manipulating the destiny of a sovereign nation-state for the sake of their own financial and political benefit is apparent.

A 2006 36-page document out of the “Burma Campaign UK” explicitly details the enormous amount of money and resources both the US government and its corporate-funded foundations have poured into Suu Kyi’s image and her “movement.” It also details the complicity of then Thai Prime Minster and verified Wall Street-stooge Thaksin Shinwatra’s government in aiding the West in their Burmese agenda.

The most telling information begins on page 14 of 36 of the report’s .pdf. Titled, “Failing the People of Burma?” the report enumerates the vast resources the West has invested in building a “pro-democracy” movement,in tandem with similar disingenuous movements throughout the region, and indeed throughout the world, and insists that even more support be given to initiate a “transition” in Myanmar. It states:

“The restoration of democracy in Burma is a priority U.S. policy objective in Southeast Asia. To achieve this objective, the United States has consistently supported democracy activists and their efforts both inside and outside Burma…Addressing these needs requires flexibility and creativity. Despite the challenges that have arisen, United States Embassies Rangoon and Bangkok as well as Consulate General Chiang Mai are fully engaged in pro-democracy efforts. The United States also supports organizations, such as the National Endowment for Democracy, the Open Society Institute (nb no support given since 2004) and Internews, working inside and outside the region on a broad range of democracy promotion activities. U.S.-based broadcasters supply news and information to the Burmese people, who lack a free press. U.S. programs also fund scholarships for Burmese who represent the future of Burma.

The United States is committed to working for a democratic Burma and will continue to employ a variety of tools to assist democracy activists.”

The report then continues detailing the specifics of each organization mentioned, including the National Endowment for Democracy:

“The National Endowment for Democracy (NED – see Appendix 1, page 27) has been at the forefront of our program efforts to promote democracy and improved human rights in Burma since 1996. We are providing $2,500,000 in FY 2003 funding from the Burma earmark in the Foreign Operations legislation. The NED will use these funds to support Burmese and ethnic minority democracy-promoting organizations through a sub-grant program. The projects funded are designed to disseminate information inside Burma supportive of Burma’s democratic development, to create democratic infrastructures and institutions, to improve the collection of information on human rights abuses by the Burmese military and to build capacity to support the restoration of democracy when the appropriate political openings occur and the exiles/refugees return.”

NED is cited as behind the creation of the New Era Journal, the Irrawaddy, and the above mentioned Democratic Voice of Burma (DVB) radio, all posing, just as the recently exposed Thai-US propaganda front, Prachatai, as “independent” media sources despite the fact they are in reality fully-funded by the US government.

The role of US State Department-run Radio Free Asia (RFA) and Voice of America (VOA) is also discussed in detail, including the revelation that US foreign policy specifically supports and actively promotes Aung San Suu Kyi and “her” agenda.

“The State Department provided $150,000 in FY 2001/02 funds to provide scholarships to young Burmese through Prospect Burma, a partner organization with close ties to Aung San Suu Kyi. With FY 2003/04 funds, we plan to support Prospect Burma’s work given the organization’s proven competence in managing scholarships for individuals denied educational opportunities by the continued repression of the military junta, but committed to a return to democracy in Burma.”

Of course, billionaire-bankster and geopolitical meddler George Soros not only funds and coordinates with the above mentioned “Prospect Burma” organization, but also directly funds activities through his “Open Society Institute” literally training an army of subversion meant to return to Myanmar and overthrow the government:

“Our assistance to the Open Society Institute (OSI) (until 2004) provides partial support for a program to grant scholarships to Burmese refugee students who have fled Burma and wish to continue their studies at the undergraduate, or post-graduate level. Students typically pursue degrees in social sciences, public health, medicine, anthropology, and political science. Priority is given to students who express a willingness to return to Burma or work in their refugee communities for the democratic and economic reform of the country.”

Throughout the period covered in the “Burma Campaign UK” report, includes a description of then Thaksin Shinawtra’s government and its support of Western activities to subvert the government of neighboring Myanmar. The Thai Ministry of Public Health, also implicated in grants to the US propaganda front, Prachatai, is mentioned specifically:

“Last year the U.S. government began funding a new program of the International Organization for Migration (IOM) to provide basic health services to Burmese migrants outside the official refugee camps in cooperation with the Thai Ministry of Public Health. This project has been supported by the Thai government and has received favorable coverage in the local press. Efforts such as this that endeavor to find positive ways to work with the Thai government in areas of common interest help build support for U.S.-funded programs that support Burmese pro-democracy groups.”

While many may be tempted to claim that such work is humanitarian in nature, it is mentioned several times that the actual goal of dolling out scholarships and other aid is specifically to create a pro-Western bloc meant to overthrow the anti-West regime in Myanmar. With names like “National Endowment for Democracy” people are meant to believe that a benign, benevolent agenda is being carried out that is in the best interest of all involved. In reality, the National Endowment for Democracy is packed wall-to-wall with corporate-fascist interests, warmongering elitists, and confessed imperialists.

Historical Pattern of Domineering Dressed up as “Democratization.”

Students of history will recognize the immense network Wall Street and London are building, not only in Myanmar, but in nations around the world, as the imperial administrative networks that had managed the British Empire for centuries. While “civilizing” the world was the excuse used by British elite to justify their megalomania and empire building during the glory days of the British Empire, Wall Street and London are now using the term “democratization” or the “opening of society” to justify their equally unjustified, criminal consolidation of power and the dominion they seek to hold over mankind.

This racket is perhaps best described by Noam Chomskyin 1993 during the “Covert Action Quarterly Anniversary Dinner” where he noted of NED’s projects in Nicaragua, “It’s about what you would expect from a bipartisan democracy campaign – it’s an attempt to impose what is called democracy, meaning rule by the rich and the powerful, without interference by the mob but within the framework of formal electoral procedures.”

In other words – “sham democracy” to placate the people with the illusion of choice, while a system perpetually run by and for the elite lords over the masses. A gilded cage kept by a global empire.

For those interested in what can be done to stop the building of this insidious empire, please see “Solutions.”